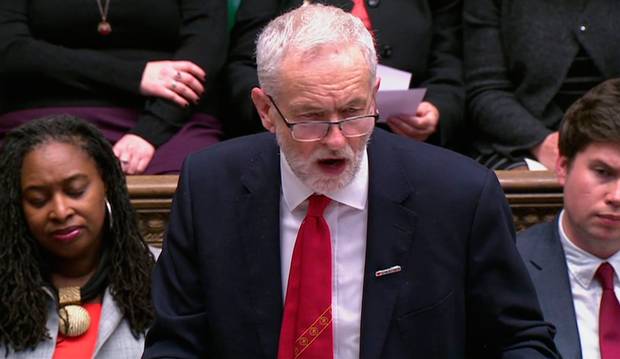 Two weeks ago, I wrote about how Theresa May was determined to bring the UK right to the brink of disaster on Brexit.

What I did not mention was Jeremy Corbyn’s role in the debacle – a role that is almost as big and as dangerous as May’s.

Corbyn’s Labour Party has it within its gift to break the stranglehold that the Tory euro-sceptic ERG and the DUP have over May’s faltering and weakened government. It could end the log jam and take the UK back from the edge of a no-deal Brexit – but instead it plays party politics.

This is not just my view, it is the view of the Scottish National Party.

The SNP excoriated Corbyn’s Labour after it abstained on an SNP amendment last Thursday night which would have extended Article 50 and prevented a disastrous no-deal Brexit. The SNP correctly lacerated Labour for its “shameful dereliction of duty” and accused it of being just like Tories in “…putting party unity above common sense”.

Not that the strategy is working for Corbyn. His Labour Party is, according to the most recent UK opinion polls, about 5pc behind the most ramshackle and rudderless Tory party in living memory.

Bizarrely, there are some here who think that Fianna Fail should be doing to Varadkar’s floundering administration what Corbyn is doing to May’s one.

It’s a tempting notion, but a wrong one.

While most Fianna Fail TDs daily yearn to scream to the expensively refurbished rafters of Leinster House that they do not have a milligram of confidence in either Eoghan Murphy or Simon Harris, they know that with Brexit crash-out potentially just 40 days away, that this is not the way to go.

They know and understand the smug realpolitik that prevails at the top of Fine Gael. They know that the Taoiseach cannot, and will not, permit either of these ministers to be sacrificed. They know that voting no confidence in either Harris or Murphy… or indeed any of the others… will trigger an immediate general election.

Having an election right now in the face of Brexit, particularly a no-deal Brexit, and facing into months of political uncertainty and instability while negotiations around the formation of a new government is formed, is in no one’s interests.

What is in all our interests is ensuring that Ireland is in the strongest possible position in discussing and implementing an orderly negotiated Brexit. This requires a window of political stability right now.

It is why Micheal Martin gave a political commitment that is unmatched across Europe to allow a minority government a secure period to focus on the Brexit emergency.

It was not an easy decision, but it was the right one and I am sure that the Fianna Fail membership who gather in Citywest next Saturday for the party’s 79th Ard Fheis will concur.

I say this because the councillors, council candidates and delegates who will attend the Ard Fheis are both politically astute and have hinterlands far beyond party politics.

They will see that the leadership has done the politically mature and sensible thing. But they are also men and women who believe deeply in the values of Fianna Fail and see what is happening in their own communities on health, housing, transport and crime.

They also see that some in Fine Gael are content to squander Martin’s Brexit-pass. They will want reassurance that once the immediate threat of a hard, no-deal Brexit passes that Fianna Fail gets back to offering voters a viable alternative to replace this do-nothing government.