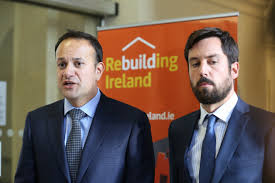 It almost had echoes of Watergate. All that was missing was the darkened car park and a mysterious, shadowy source inside the administration determined to get the truth out there.

Except, there was no Fine Gael leak. There was no document that the party wanted kept under wraps. What there was, however, was a bit of political propaganda that Fine Gael wanted spread far and wide. It was a dark-ops department manoeuvre worthy of what Sean Lemass used to call the Fine Gael rumour factory.

But this one was a bit different. These exercises are normally intended to deflect attention away from one’s own problems or to make problems for the other side – or both. Look a bit deeper at this episode and you soon see that this one had a darker, more sinister motive.

Senior Fine Gael figures knew that “leaking” their seditious bit of fake news would run counter to the spirit and the letter of the confidence and supply agreement, not least the “no surprises” clause.

But agreements are trifling matters to them, even one that is keeping their ministers in jobs, and which, according to other “Fine Gael sources”, they wish to see extended until June 2019, at least.

So why “leak” this right now?

Though polling day is six, nine or 12 months away, Fine Gael is firmly in election mode and has been for months. Everything it says and everything it occasionally does, is done with that end in mind. Governing comes second, campaigning comes first.

A key element of their pre-election strategy is to constrict the narrative of the next election so tightly that it will be fought on Fine Gael’s right-wing ground. To do this they need now to stymie Fianna Fail putting real social justice on the top of that election agenda.

This is why Fine Gael leaks a fiction-file that accuses Fianna Fail of being “reckless” and “spendthrift”. Its evidence is that Fianna Fail wants to use some of the proceeds of economic growth to lift families out of poverty by investing in education, housing, health and welfare.

Fine Gael wants to keep these families invisible. If it can do that, its strategists say, then Fine Gael can divide up the benefits of growth among its affluent support base.

But, as Social Justice Ireland reminds us, we have almost 800,000 people living in poverty, the largest proportion of whom are children. We have a social housing crisis that is leaving more of our citizens living on the edge.

These are issues that Irish people want addressed. They want policies that tackle homelessness, hospital waiting lists and child poverty. They want to hear social housing shortages, soaring rents, lack of affordable childcare and rural broadband and many other issues discussed and debated. They want their children able to buy their own homes and realistically aspire to better lives. What they don’t want is an election that is just about maintaining the status quo by keeping the focus on various shades of Fine Gael’s right-wing agenda.

But, the “leaked” document proves that this is the election it wants to fight.

I will not be deterred from pursuing justice for poorer people and will not allow Fine Gael to try to shut down the election debate before it begins. The last Fianna Fail-led government had its budgets independently rated as “economically progressive” – despite the acute shortage of funds after the 2008 global economic collapse.

Our priority, even in those most difficult days, was to make the painful corrections that had to be made while ensuring that we target whatever resources we could find at protecting those most hurt by the crash.

That run of “economically progressive” budgets ended with the election of Fine Gael and Labour in 2011. It only started again with the 2016 and 2017 budgets due to Fianna Fail insistence on there being more public spending on welfare and services. Both these budgets were rated as “mildly progressive”.

It is clear that Leo Varadkar and Eoghan Murphy want to be freed from that insistence in 2018 – but if they think “leaking” FG spin is the way to do it, better think again, lads.