It was Fianna Fail who made real progress on pensioner poverty 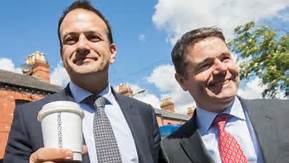 Around this time last year Minister Paschal Donohoe became very upset at me when I called for a €5 increase in the old-age pension. He was furious. He claimed that I wanted to “…create the kind of politics that has created the cost and difficulty that we want to put behind us as a country and we are not going to go down that path”.
Everybody bar Donohue could see the foolishness of claiming that a decent pension increase could send us hurtling back to the economic crash. Well, not quite everybody – Leo Varadkar was equally as blind to this truth.Back then, Donohoe was a humble minister for public expenditure and Varadkar was somewhat less humble minister for social protection. Though they were not making the key decisions, they were cheerleading them, although this wasn’t a full-time role for Varadkar, who was more pre-occupied with plotting his leadership bid.

What a difference a year makes. The two guys who led the public charge against me on the €5 increase now hold the top two jobs. But taking big decisions means having to carry the can for them. Thus we have the current pantomime of the Taoiseach switching roles.

Hey presto, the man who launched his leadership bid with a “fake news” campaign against social welfare cheats now presents himself as the champion of the pensioner and others depending on welfare. But like all pantomime illusions, it is precisely that: an illusion. It is political smoke and mirrors that requires the audience to completely forget everything that has happened up to then.

They need us to forget how the Fine Gael/Labour government cut a range of ancillary benefits, including abolishing the bereavement grant and axing the telephone allowance, and only barely made any effort to keep pension rates at their 2011 levels.

Most of all they need us to forget that real progress was made by Fianna Fail-led Governments in tackling pensioner poverty between 1997 and 2007. Basic social welfare rates increased during that time by 123pc, three times the 41pc increase in the Consumer Price Index and double the 61pc increase in gross average industrial earnings over the same period.

No one was buying yachts or taking month-long cruises around the Caribbean on the back of those welfare increases. Nobody who is reliant on social welfare to survive from week to week can be described as well-off. What those Fianna Fail governments did was to lift a lot of people just over the poverty line. Sadly, the financial crisis of 2008 saw many drawn back across that line. That failure cost Fianna Fail dearly, but even with the daunting decisions it had to make in 2009 and 2010 it still prioritised those hit hardest by the crisis and did not cut pensions or ancillary benefits.

It was a progressive response. Those who could afford most were asked to pay most. That all changed in 2011, even though the bulk of the painful decisions had been taken by then. Out went the progressive approach and in came a regressive one. Some of the most vulnerable sections of society were gone after with Fine Gael targeting ancillary benefits, even producing proposals in 2012 to cut home care and personal assistants for the disabled.

It is no different today. Despite the cuts of the previous five years, some Fine Gael TDs are now looking to savage the Free Travel Pass that people have enjoyed since the 1960s.

Clearly, no one expects this government, or Dail, to run for a full five-year term, but they do expect it to do something for as long as it does run – and in the case of pensions that means proportionate increases each year and every year.

By Varadkar’s own admission last year’s budget was only a very small first step in creating a society where everyone, and not just the privileged few, has a place. It started to reverse the regressive policies of the five budgets before it. For pensioners (the majority of whom depend solely on the state pension) carers and the disabled, there is a lot more work still do be done.