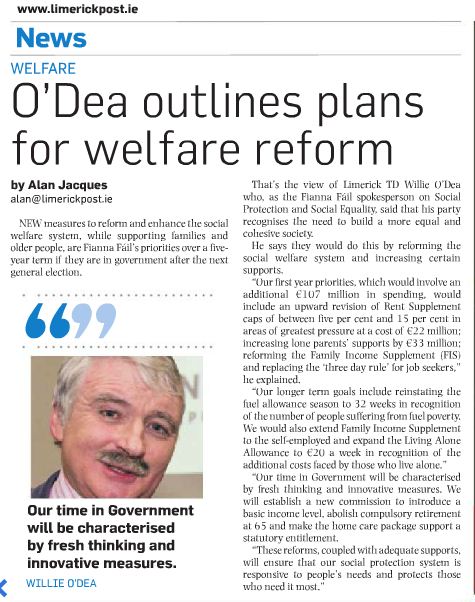 Fianna Fáil Spokesperson on Social Protection and Social Equality Willie O’Dea has outlined the party’s priorities over a five-year term including reforms to social welfare and pensions system.

Deputy O’Dea said Fianna Fáil is committed to new measures which will reform and enhance the social welfare system, while supporting families and older people.

Deputy O’Dea commented: “Fianna Fáil recognises the need to build a more equal and cohesive society. We will do this by reforming the social welfare system and increasing certain supports. Our first year priorities, which would involve an additional €107 million in spending, would include an upward revision of Rent Supplement caps of between 5%-15% in areas of greatest pressure at a cost of €22 million, increasing lone parents’ supports by €33m, reforming Family Income Supplement (FIS) and replacing the Three Day Rule for job seekers.

“In Government Fianna Fáil will reform the social welfare system and undo the damage done by Fine Gael and Labour. We will build a more equal society, grounded in decency and fairness. These two elements have been clearly lacking during Fine Gael and Labour’s time in Government as they have actively pursued an agenda that has increased inequality and punished the most vulnerable in society, including children, older people and people with disabilities.

“Our longer term goals include reinstating the Fuel Allowance season to 32 weeks in recognition of the number of people suffering from fuel poverty. We would also extend Family Income Supplement to the self-employed and expand the Living Alone Allowance to €20 a week in recognition of the additional costs faced by those who live alone.

Deputy O’Dea added: “Fine Gael and Labour have lacked vision. Our time in Government will be characterised by fresh thinking and innovative measures. To that end, Fianna Fáil will establish a new Commission to examine putting in place a basic income level, abolish compulsory retirement at 65 and make the home care package support a statutory entitlement. These reforms coupled with adequate supports will ensure that our social protection system is responsive to people’s needs and protects those who need it most.”